Chompy!  Chompy is my ruthless protector and much like Sabine, he really really likes homeostasis.  When I’m curious and feeling experimental, vulnerable enough to put some ideas out there, his appetite is stimulated like a carnivore getting a whiff of fresh blood.  He wants me to stay exactly the same, so any efforts to peak over the precipice are swiftly cut up, shredded by his layers of razor-sharky teeth.  He is my inner critic, and I have spent most of my life having a limited perspective of his existence.  I knew he was there, enough so to allow feelings of shame or embarrassment to warm my cheeks to a blush if I dared feed his hunger with something new.

I met him face-to-face in an IFS session and saw my first visual representation of Chompy the Killer.  During the meditation, I felt whoozy, like I could faint and when the fog settled, there he was, crouching on his haunches, a fantastical grinning beast, baring his teeth. Menacing, spidery legs sat poised, ready to spring into action.  He morphed from a growling, spitting creature into a razory-metallic shredding machine, and I was aware of how his intimidation, spiny barbed barriers, stopped me so many times from being authentic, taking risks, connecting to inner wisdom, and the wisdom of others.  With encouragement from my therapist, I breathed and took a moment to take in his identity.  It didn’t feel quite as scary to have been introduced, still we didn’t understand each other.  My therapist encouraged me to draw or paint the imagery I found within these sessions and while I pondered doing so, I didn’t actually follow through, until…

The OSP process challenges us to develop a daily practice of art-making, even if it is a quick sketch on an index card.  I was particularly crabby one day with my kids snarking at me, (hadn’t developed a daily art practice—nor have I yet, really) feeling a bit like a punching bag.  I took a few moments to “draw it all out,” literally.  I got out the pastels and an index card, (because I felt dubious and ambivalent,) threw it down and began to strike at the card. The dark scribbling, so fitting for my mood at the time, emerged as the chomping little shredder I had met a few years back in my IFS session.  As I witnessed, I had a chat with my little chomp-animal, and in the process felt endeared to him.  He took on that Muppets-Animal appearance, his once matted coat fluffing out to billow like red feathers. In our dialogue, I asked him to cool his jets a little, and let me be.  He told me he was really there to help me avoid embarrassment and failure, but in the process, he rather sheepishly revealed his good intentions.  The dialogue tamed his fiery rage and as I scooted a little closer, his once erect-pinscher ears folded down, allowing me to caress surprisingly soft, downy plumage.  His teeth stopped chattering and spitting and a boyish, toothy grin emerged.

So, there he is.  Instead of a fearsome, terrifying beast, scaring me into submission, he now seems more like a little brother—a daring and noble little brother.  It doesn’t mean I am suddenly exempt from fear and self-suppression, but it helps to have made his acquaintance.  Instead of being paralyzed with reactivity, I can take a breath, understand rationally that he isn’t crouching to bite my ankles and then, negotiate with him a bit.  He still wields a decent amount of power, but we are working together on the possibilities of our future together.

In our last OSP facilitator training, we were asked to facilitate workshops for our fellow classmates.  “Wands,” were the workshop facilitated by one of our pals in class.  I haven’t mentioned that our process includes 5 steps, so let me share a little about that:

Step 1: We set intentions for our process.  Intentions are active messages stated in a positive tense, “I am calm and invite the wisdom I gain from the creative source.”  (This part is still a hard one for me, because it feels like an affirmation, and like I said in the about me page, I’m a belligerent affirmer—a euphemism for self-deprecator.)  Step 2: The process, which is accompanied by rhythmic or soothing music.  We create art with the materials provided and we follow creative impulse.  Step 3: Witness.  We sit before our work and write about the imagery that comes to mind as we observe/witness our piece.  It isn’t about explaining the piece, rather allowing information and symbolic thoughts to surface and be expressed on paper.  Step 4: Reading.  Optional, we are invited to read all or parts of our witness in front of the group.  Again, it isn’t to explain, or to perform in any way for the group.  The purpose is to hear our own voice articulate our witness.  It allows truths to be heard.  Step 5: Closing the space; often following the lovely tone of a Tibetan singing bell, and without commenting on the work of others, we ask questions or share observations about the experience.

Here is my wand.  It was a joyful process, wrapping and holding a beautiful birch branch and transforming it into a new creation.  As I witnessed, I noted that Birch trees were in abundance on my grandparents’ property when I was little, which brought to mind the safety I felt in my grandmother’s charming home.  I spent hours in her warm cottage, drinking tea, yapping endlessly.  My grandmother, my “Meme” had abundant patience and never tired of anything I could lay on her.  She was my safe-haven, my peace, the one who loved me unabashedly and unconditionally.  I remember her hands, fingernails with the lightest ridges that made their surface funny to the touch; beautiful fingers that would run tirelessly through my hair, or gently caress my back as I lay my head across her lap.

My initial association with a wand was the Cinderella cliché of the fairy godmother who waves her wand and Bibity bobity boo!  Your wishes all come true!  Occasionally there are workshop projects that I resist at first and it was thus for the wand workshop–I didn’t really want to create a wand. In my day job, higher-ups come my way all of the time and have expectations that imply I really do have a magic wand that I can waive, thereby fixing the troubles of clientele—people who most often have mental illness and whose behavior doesn’t fit into our perfectionist, intolerant culture.  Instead of the mythology coming up for me, it was the safety of my grandmother instead, that emerged.  My wand is about safety, the haven that is needed when younger, less evolved parts are activated.  My wand doesn’t waive anything away, make anything disappear or change.  Holding it in my hand is soothing and wonderful, though.  I immediately think of Meme, her laughter, her encouragement and love.

Last year I started taking a facilitator training for the Open Studio Process (we like to call it OSP) through the Open Studio Project, a non-profit arts organization in Evanston.  The idea of the work there is that 1. Anyone can create art, 2. The process of creating art can be cathartic and information giving and 3. It isn’t about the final product—it is all about the process.  I’ll be sharing more about this in future posts in case it interests you.

A motivator for me in starting a blogging effort is to build a sense of discipline into a practice of creative process.  That’s a mouthful.  There is this part of me that likes to sabotage my goals and dreams that starts like this, “I wish I was more like her, or I wish I could do “X” on a more regular basis.”  My little Sabine the Saboteur allows me not to take responsibility for my inaction and ambivalence when my wishes don’t come true.  She says to me, “you’re just so busy,” or “you’re so tired, and wouldn’t another 30 minutes of sleep be so much nicer than anything else?”  She is a two-faced, manipulative, controlling little be-atch because she wispers these soft little nothings to me, soothes and comforts, but ultimately gets her way, which is to keep things exactly the way they are.  I don’t change.  Sabine likes homeostasis—she doesn’t really like Penelope either, because even though she isn’t the most intimidating force, she’s younger and more peppy than Sabine.

So, I have this thought that if I’m writing to you out there in the blogosphere, my process efforts won’t feel as much like a practice to her.  It will feel responsive, I’m writing a letter to good people—it suits that service Part of me—which is a different story to explore someday.  I will write more about what I mean when I reference parts too–I’ll tell you all about it.  I hope to include bits of art that I make in my process along the way too and I might even figure out how to create a page with a little gallery.  Below is a little diddle that I dreamed up last night after this book came in the mail!  Newest fad for Sabine to sooth away, or is it?

Lesson #1 (sort of, as usual with me I did my own interpretation of the lesson) from the Book, “One Zentangle A Day,” by Beckah Krahula. 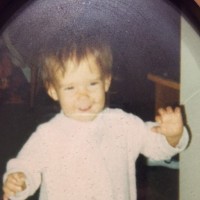